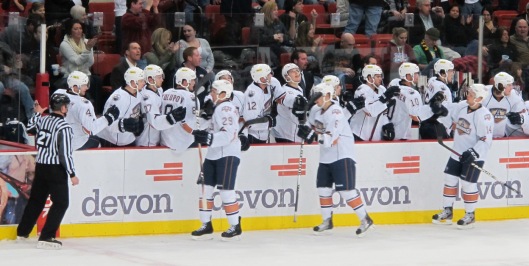 The second in the series – The Life of a Minor League Hockey Player.

Dollars and Sense – these are two requirements for the minor league hockey player. The exceptionally good hockey player can make decent money in the minor leagues. However, for the majority of minor leaguers, they must spend their money wisely and perhaps even creatively in order to survive. Generally the salaries for a minor league player are low in comparison to their risky careers, and the wise player will usually have a backup career in mind or even currently in progress. Careers can end suddenly and it is rare to be able to reach the age of 40 and still be playing professional hockey! Or course, there are always exceptions, but they are unusual and a topic for another installment in this series.

Below are a series of questions and answers based upon the current AHL-PHPA Collective Bargaining Agreement for the 2012-13 season (AHL-PHPA refers to the American Hockey League – Professional Hockey Players’ Association.) They range from salary issues, minimums and maximums, including playoff-pool salaries; travel expenses during the regular season, All-Star Games, training camp, and pre- and post-season travel, as well as those players traded mid-season; and issues related to health care and insurance.

Salary: Is there a minimum salary for AHL Players?

July 2014 Note: The AHL and PHPA had the option to renew the 2010-2014 CBA for 1 more year through the end of the 2014-15 season and at this summer’s meetings both agreed to renew. Next summer the AHL and PHPA will have to renegotiate a new CBA. As for now, there has been no announcement of an increase in salary for the 2014-15 season but it would seem likely, based on the standard increase in previous seasons.

Players playing in the AHL on an AHL Standard Player’s Contract shall receive minimum compensation as follows:

Players on loan to the AHL from Lesser Leagues shall receive minimum compensation as follows:

The above amounts shall be pro-rated daily over the AHL regular season.

What is the standard length of the AHL season?

To get an idea of NHL one- and two-way salaries go to CapGeek.com and click on your NHL team. Each team lists their contracted players for the season, disclosing Cap Hits and Salaries. The NHL roster will appear first followed by the Non-Roster players which can be a combination of AHL and lower league players under contract with that team. Clicking on a player’s name displays their full contract history, with details of their specific contracts. For instance, you will see the LENGTH of the contract, the VALUE, TYPE and EXPIRY STATUS. And each season is broken down by AHL Salary, NHL Salary, Performance Bonuses, Signing Bonuses and CAP Hit. For the young players on a two-way contract the AHL salaries can range from the $50,000’s up; for Entry Level Contracts, the maximum AHL salary with the current CBA is $70,000. Keep in mind there are many variables here, but generally we see salaries from $55,000 up to $65,000 for the youngest group, and depending upon how long the player has been in the business their salaries go up from there.

Is there a maximum salary for AHL players? [Source: PHPA page.]

There is no maximum salary a player in the AHL can earn.

According to CapGeek.com (on August 23, 2012) Keith Aucoin of the Toronto Maple Leafs/Marlies is the top paid AHL player at $350,000 per season. Coming in at number 10 is OKC Barons goaltender Yann Danis who is paid $275,000 in the AHL per season and he is the highest paid AHL goaltender on the list. If he is moved up to the NHL his salary would be $800,000. You also have to consider any possible bonuses into that calculation, and Danis has a $25,000 Signing Bonus included.

Here is an interesting OKC Barons tidbit: Did you know that Alexandre Giroux made $500,000 playing for the team in 2010-11? He was signed to a 1-way NHL contract with the Oilers.

To give you some perspective of top salaries in the NHL, the Nashville Predators defenseman Shea Weber was recently signed to a 14-year one-way contract worth $110,000,000. His first year he will make $14M salary plus $13M signing bonus in the front-loaded contract, and his cap hit is $7,857,143. That is light-years away from any minor league AHL contract.

[Caveat: CapGeek.com only lists players on NHL team contracts; the AHL does not disclose AHL only contract details.]

If a player’s salary is based upon the regular season, what happens during the playoffs?

As of January 2013, the new 2013 NHL Collective Bargaining Agreement eliminated the AHL Clear Day Roster altogether. The AHL Playoff Roster — of 22 players (or shares) — will be submitted by each team at the end of the regular season in later April.

If a team goes into the playoffs, a player’s playoff salary is separate and is based upon a “playoff pool.” It only includes the 22 players on the playoff roster . And you ask, where does that leave the other players NOT included on the  playoff roster? This is where saving money wisely helps the minor league player. There is a chance – a possibility –  a glimmer of a long shot that they might play in the event of three or more players being injured. So they wait – unpaid. Training daily and sitting in the rafters.

The definition of the term “Players” shall include all Players on the Member Club’s clear day list on the “clear day” date and not otherwise transferred or reassigned to another Professional Hockey Club under the terms of that Player’s contract. The definition of the term “Players” shall not include coach, general manager or trainer, but shall be limited to actual Players. The distribution of the playoff pool shall be made on the basis of 22 shares for 22 Players. Any lesser number of Players per team shall share pro-rated the 22 shares, and any greater number of Players per team shall be the responsibility of the individual team. The clear day list is to be posted in the dressing room upon receipt from League Office.

Based upon regular season ticket prices, the AHL Member Clubs and the PHPA shall share in the proceeds of the playoffs for the benefit of the playoff pool as follows:

Are AHL players paid a per diem allowance while traveling?

The per diem allowance for each Player accompanying his team while he is away from his home city for the purpose of playing a regular season or post-season game is as follows:

And if players participate in the AHL All-Star Games?

The AHL shall provide transportation and accommodations for each Player and the spouse of each Player who participates in the AHL All-Star Game. Each All-Star participant will be given per diem as per this Agreement.

In the event the unsigned player at the Member Club’s training camp does sign a professional contract, then said Player shall be entitled to the same per day meal money allowance as the signed professional Player, and said payment shall be retroactive to the beginning of training camp.

And what about lodging for players during AHL Training Camps?

Are players responsible for their Pre- and Post-season travel expenses? [Source: Quote is condensed version taken from online PHPA comments on CBA.]

Travel expenses incurred by a Player, his legal wife and their children on the way to their home city at the beginning of, or during the season, are the responsibility of the Club. This includes airfare or oil and fuel for one automobile, the rental charge for a moving trailer, and reasonable food and lodging expenses.

And what about those players traded, claimed, or assigned from one Club to another during the AHL season?

Yes, these costs and considerations are covered and include moving expenses and lodging expenses with normal and reasonable stipulations. [See the full contract for specific details.]

What about Health and Welfare benefits?

Yes, the players are covered. [See the full contract for specific details.]

Join me again for the continuation of The Life of a Minor League Hockey Player series.

Thanks to Eric Rodgers and Neal Livingston who provided input and verification on a few of these points. For a breakdown of the various types of contracts, read Eric’s helpful FYI: Contracts and the Barons.