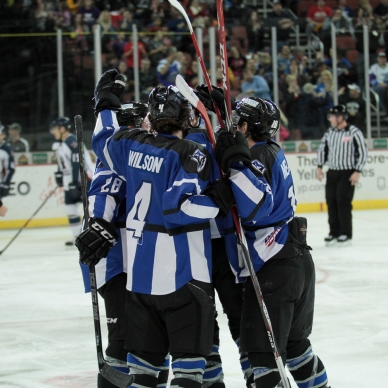 Now that the Wichita Thunder has one ECHL season in the books the coaching staff and GM will now be looking ahead to their 2015-16 season focusing most of their energy on building a winning team. As players are signed, and as former players move elsewhere, I will keep you updated with the transfer news.

Eric Meland’s rights were traded to the Gwinnett Gladiators.

Kirill Tulupov’s rights were traded to the Orlando Solar Bears, who then traded his rights to the Rapid City Rush.

2014-15 Thunder Players Signing with other Teams:

Erick Lizon, who was part of the Wichita Thunder for four seasons from 2011-12 through 2014-15 signs with the Nottingham Panthers (EIHL) – May 28, 2015.  He will join his teammate from this past season Theo Peckham.

Eric Meland, a defenseman who played 61 games with the Thunder in 14-15, signs in Europe with Lillehammer (Norway) – May 21, 2015. At this point, Meland is the only North American player on the Norwegian team but expect that to change over the summer.

Theo Peckham, Captain of the Thunder, playing 26 games through December 2014, signs in England with the Nottingham Panthers in the EIHL – May 27, 2015.