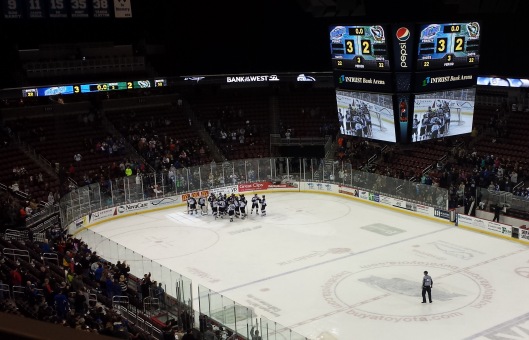 Despite the penalty-filled first two periods the Wichita Thunder grabbed a 3-2 win last night over the Quad City Mallards on a very snowy, icy, blizzardy night in Wichita. While the crowd was certainly not the 4,100 as listed on the game sheet (tickets sold), it was a very impressive size considering the snow started to hit Wichita with a vengeance two hours prior to game time, and roads deteriorated rapidly as seen below on the KDOT camera view at 5:24 p.m.

In what should have been a clear advantage for the Wichita Thunder due to the Mallard’s short roster, last night’s game turned into a fairly equal battle due to the Thunder’s 12 penalties, amounting to 40 minutes, in just the first 2 periods. The Quad City Mallards arrived in Wichita with an undermanned roster with just 14 skaters due to their injuries and illnesses.

At 1:47 into the 1st period Wichita started their penalty-fest as Erick Lizon headed to the box for holding. Within the next 8 minutes, Trebish, Reum, and Trebish again would follow, however Wichita’s 4th ranked penalty kill units halted the Mallards’ efforts. Later it was Quad City who filled the penalty boxes, and at 17:56 Wichita’s Ian Lowe scored on a 5-on-3 powerplay, assisted by Mike Wilson and Eric Meland. The 1st period ended 1-0 Wichita, with 10 infractions (6 for Wichita and 4 for Quad City), and an overwhelming shots-on-goal at 14-6 for the Mallards.

The 2nd period’s chippy play escalated from the onset with Wichita and Quad City penalties which resulted in two goals for Quad City. The first at 7:37 was a powerplay goal by Joe Perry, and the second at 15:34, a goal by Todd Fiddler scored at 5-seconds into their 8th powerplay to take the lead 2-1. The 2nd period’s penalties amounted to 6 infractions for Wichita (28 minutes) and 3 for Quad City (6 minutes), with shots-on-goal 9-7 for the Mallards.

The 3rd started with another penalty at 1:26 by the Mallards’ Antti Pusa which led to another Wichita Thunder powerplay goal by Kenton Miller at 2:16 (with assists from I. Duval and M. Wilson), to tie the game at 2-2. Miller’s goal was the 4th powerplay goal of the night, split evenly between the Thunder and Mallards. Later in the 3rd at 15:30 Thunder’s RG Flath scored off a great feed from Danick Gauthier, assisted by Dan Milan, for the game-winning goal. Shots-on-goal for the 3rd were 9-9.

Tim Boron played a heck of game last night, with a number of outstanding saves, only allowing 2 goals on the 32 shots he faced.  The officiating was on the ticky-tacky side last night, part of the reason the game saw so many penalties, but teams have to be prepared to halt any actions that might lead to more, which the Thunder did in fact carry out in the 3rd after their 28 minutes in the box during the 2nd period. (Read Bobby Metcalf’s article linked below for Quad City’s coach Ruskowski’s quote on the details of a penalty call made on him at the bench.)

The Thunder’s win moves the team into 2nd place in the Central Division with 37 points, tied with Quad City, but Wichita outranks them with points percentage due to their 2 games-in-hand.

After a somewhat rushed post-game bus trip out of snowy Wichita last night the Thunder safely made the trip south to Allen, Texas and will face-off against the Allen Americans at 4:05 p.m. this afternoon.