Following the ECHL Stockton Thunder’s announcement that Kristians Pelss was being recalled to the OKC Barons by the Edmonton Oilers, there were several scenarios tossed about by media and bloggers. One was that the AHL would honor the ECHL’s 21-game suspension of Pelss, which had been announced on December 5th. The other scenario was that the Barons would be able to possibly play Pelss prior to the end of his ECHL 21-game suspension. As it turns out, it is a little of both. It just depends upon how you calculate the suspension – by games suspended, or by calendar date.

In the case of Pelss he was suspended by the ECHL for his actions in Stockton’s December 1st game vs. Bakersfield when he “delivered a two-handed, forceful slash, behind the play, to the face of an unsuspecting opponent, causing injury” according to the ECHL announcement. There is no video of this event however there is this video which shows the Bakersfield player Olivier Dame-Malka (no. 44) chasing down Pelss to the boards. After that the camera follows the puck back up ice, and the next view is Malka down on the ice. As a result, Pelss is out for 21-games, through January 12th. The intent of this article is not to debate the merits of the suspension but rather how the AHL possibly calculates their reciprocity of other league suspensions.

Late addition: This afternoon Bruce McCurdy from The Cult of Hockey at The Edmonton Journal published his article “Kristians Pelss recalled by OKC but will continue to serve suspension; Video of reckless slash emerges” which carefully explores Pelss’s slash and video evidence. (Well done, Bruce, and thanks for the shout out!)

Interestingly Jack Michaels, the Edmonton Oilers’ Play-by-Play Announcer tweeted not long after the call-up announcement that Pelss would not be eligible to play for the Oklahoma City Barons until January 11th.

Pelss was suspended by the ECHL for 21 games as a result of a slashing incident during a game on Dec. 1.

Pelss will be eligible to play for Oklahoma City beginning with their game on Jan. 11 vs. Charlotte.”

Last season I wrote about a number of NHL suspensions under the new NHL Senior Vice President of Player Safety, Brendan Shanahan in an article “Is the Health and Well-being of a Hockey Player too Costly for the Game?” What struck me was in a number of cases cited in my article some of the suspended players were sent down to the AHL and those players’ reciprocal “AHL suspensions” did not entirely match the NHL suspensions. The AHL stated in the case of Jean-François Jacques and Tom Sestito on September 29, 2011:

“According to the AHL’s by-laws, a player who is under suspension in another league or organization who seeks to play in the AHL while under that suspension will have the relevant disciplinary matter independently reviewed by the President of the American Hockey League, who may in his discretion deem the player ineligible.”

In the case of Jean-François Jacques, who was playing for the Anaheim Ducks, Jacques was suspended for leaving the bench with the intention of starting a fight against Vancouver Canuck Mike Duco in their September 24th game.  In addition to the automatic suspension for starting a fight in the final five minutes of the game, Jacques also received a suspension for the remainder of the preseason games and five regular season games which suspended him through the team’s October 17th game (see schedule below).

The AHL stated that Jacques was “ineligible to play in the AHL until October 15th” which according to the Syracuse Crunch schedule below suspended Jacques for one AHL game on October 14th. Jacques was on the roster and played for the Crunch on October 15th. Keep in mind that the AHL’s suspensions in no way affect the terms of the player’s NHL suspension. If Jacques had returned to the NHL, he would still have had to complete the full number of NHL suspended games and he did not make his debut with the Ducks until November 16th.

A similar case occurs with Philadelphia Flyers’ Tom Sestito, who delivered an illegal boarding check to New York Rangers Andrea Deveaux. Sestito was suspended for the remainder of the preseason and two regular season games – October 6th and October 8th, 2011 (see the Flyers’ 2011-12 Schedule below). The AHL announced that Sestito had been “ruled ineligible to play in the AHL until October 9, 2011” which allowed him to play in the team’s 2nd game on October 14, 2011 and he did in fact play. Again, keep in mind that the AHL’s suspensions in no way affect the terms of the player’s NHL suspension.

In yet another case on September 28, 2011, Brendan Smith was suspended for the remainder of the Detroit Red Wings preseason games and five regular season games (through October 21 – see Detroit’s schedule below) for the illegal hit to the head of Chicago Blackhawks Ben Smith. The AHL announced that Brendan Smith was ruled ineligible to play for the Grand Rapids Griffins until October 18, 2011 (see their AHL schedule below). Smith was out three AHL games (Oct. 8th, 14th, and 16th) and he played for the Griffins on October 18th. Once again, keep in mind that the AHL’s suspensions in no way affect the terms of the player’s NHL suspension.

Now, let’s look at the case of Kristians Pelss.

ECHL Stockton Thunder Schedule – The Pelss suspension covers 21 games from Dec. 4th through Jan. 12th, 2013, of which he has already served a four game suspension.

According to Jack Michaels’ tweet (see at the top of the article) the AHL has deemed Pelss eligible to play for the Barons on January 11th. According to the AHL Oklahoma City Barons Schedule from Dec. 11th through January 12, 2013 (see below) he will sit out 13 games in OKC – added to Pelss’s already suspended four ECHL games – a total of 17 games. 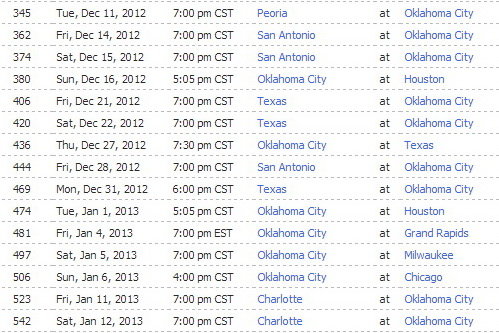 As you can see, we are not talking about parity in number of games suspended but rather calendar dates. The AHL return date never seems to exceed the date of the original league’s last suspended game. The only information I find relating to this matter appears in a number of AHL announcements dealing with such suspensions, which never seem to go into great detail, here and here.

“According to the AHL’s by-laws, a player who is under suspension in another league or organization who seeks to play in the AHL while under that suspension will have the relevant disciplinary matter independently reviewed by the President of the American Hockey League, who may in his discretion deem the player ineligible.”

This method seems very logical given that various leagues do not overlap schedules – schedules can vary greatly in terms of length and oddity – therefore using calendar dates does seem to be the best method of reciprocity among the minor leagues.

According to OKC Barons coach Todd Nelson on Monday’s Barons Radio broadcast, Pelss “is going to come back here and skate with us and work out with us. He has to serve his suspension so that’s basically all it is. We just want to have him up here where we can have him work out with Kevin Hanlon, our strength and conditioning coach. [He’ll] work out with us on the ice, because Kevin’s here if our team goes on the road so he’s still going to get workouts and skates even if we’re on the road. So it’s a better situation versus maybe staying in Stockton and not doing much on his own because there is no person there to look over him. He’s on his way here tonight, and he will be skating with us tomorrow and working out with us until his suspension is served.”

Nelson added “He’s a prospect of the organization and we want to keep an eye on him and just make sure that he’s staying in shape and still at a high level so when he does come back he’s able to compete and do very well.”

If anyone has a copy of the AHL By-Laws which might shed more light onto this issue, please let me know. The only other examples related to league reciprocity I have located in the AHL online news archives are much earlier cases from October 2007 regarding Steve Downie and Jesse Boulerice, both with the Philadelphia Flyers organization at that time. All five cases deal with NHL suspensions and in each case the player’s AHL eligibility “does not affect the terms” of their NHL suspension. In other words, if they return to the NHL, they still served the remainder of their suspension, if they had not already.

4 thoughts on “AHL Reciprocity and the Case of Kristians Pelss”