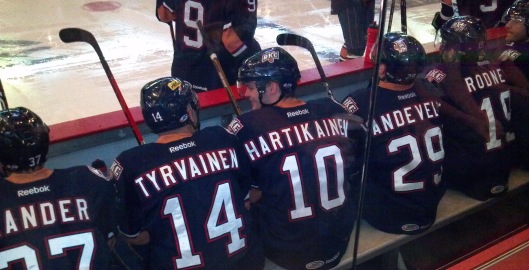 Former OKC Barons defenseman Ryan Lowery has signed with the ECHL South Carolina Stingrays, the ECHL affiliate to the Boston Bruins. On Sept. 22 he signed a PTO with the Providence Bruins and will be attending training camp next week.

“Edmonton Oilers General Manager Steve Tambellini announced today the club has placed the following players on waivers, for the purpose of being assigned to Oklahoma City of the American Hockey League.” – Dane Byers, Yann Danis, Tanner House and Alex Plante. This is part of a special waiver period through September 15 to allow veteran players on a 2-way contract to play with their AHL team. They would not have to be put on re-entry waivers if they are called back three days before the start of the NHL season.

Ex-OKC Barons forward Ben Ondrus signs with the Idaho Steelheads in the ECHL for 2012-13 season. Last season Ondrus played for the Krefeld Pinguines in the DEL. Ondrus was Captain for the OKC Barons during their first season 2010-11.

Linus Omark has signed a 1-year contract with the Swiss NLA team Zug coached by Doug Shedden. I wish him all the best and expect to see him return to the NHL next season. Read Martin Lundén’s post today at Swedish Oil containing translations of Omarks comments. See also Jonathan Willis’s article Linus Omark: Plotting an NHL Return through Switzerland at OilersNation.

According to Dan Tencer on twitter: “Linus Omark’s agent Patrik Aronsson tells me that they turned down multiple KHL offers and felt Zug was the best fit to get back to the NHL.”

2006 Edmonton Oilers draftee Bryan Pitton signed with Fife Flyers (in Scotland) part of the EIHL in the UK. His brother Jason is also signed with the Fife Flyers. Bryan played with the Stockton Thunder for several seasons and played 8 games with the OKC Barons during the 2010-2011 season.

According to agent Darryl Wolski, Andrew Martens (who spent a short time with the Barons last season and then signed with the Toronto Marlies) has re-signed with the Wichita Thunder CHL for 2012-2013 season. Good luck Andrew!

Former Oilers/OKC Barons center Gilbert Brulé has signed a one-year contract with the Zürcher Schlittschuh Club Lions in Zurich, Switzerland under coach Marc Crawford, according to News1130 Sports. Good luck Gilbert! Although you were not here for long, OKC fans will miss you. (BTW – Canuck fans, Jeff Tambellini plays for the Lions as well.)

The Oilers have re-signed Alex Plante and Chris VandeVelde to 1 year contracts. Both signed 1-year 2-way contracts with the Oilers.

Dylan Yeo signs with the Toronto Marlies. A rumor about a connection to the Marlies had been floating around for several weeks and it was finally announced on Tuesday. All the best to Dylan! OKC will miss you and that hard shot from the blue line! Link to his interview earlier this year.

Teigan Zahn has signed an AHL contract with the Barons. He is a 22-year-old defenseman who has played just over 5 seasons with the Saskatoon Blades (WHL) and last season with the University of Calgary (CWUAA). See his HockeyDB.com listing. See also the official announcement Barons Sign Defenseman Teigan Zahn and Neal Livingston’s Teigan Zahn becomes a Barons Defender.

It is being reported that Linus Omark  – This is yet another misquote. Please link to our friend Martin Lundén’s Swedish Oil for an accurate quote by Linus Omark. Martin’s full comment on Linus’s quote: “What it said was in fact that he was looking to find a home “hopefully within the near future, but you never know” (how things go). If a lockout should occur, something Omark says he “haven’t been thinking about that much, as I just want to find a home (i.e, a team to play for)”. Another funny thing with the misquote is that it clearly stated that “he will play for Luleå HF of the SEL” when in fact the item reads that if a lockout occurs playing for Luleå is far from a guarantee, but “obviously Luleå comes first in mind, but that’s nothing I’m thinking about at this moment”.”

Thanks, Martin for an accurate translation of Omark’s comments.

Ryan Keller’s signing is now confirmed: He signed with Genève-Servette of the NLA in Switzerland. OKC fans will miss this Calder Cup Champion! All the best in Geneva, Ryan! Source: Ryan Keller Rejoint les Vernets.

Triston Grant has signed with the Grand Rapids Griffins. OKC fans will miss his feisty play and toughness on the ice. All the best in Grand Rapids, Triston!

Andrew Lord signed with SC Riessersee – 2 Bundesliga in Garmisch-Partenkirchen, Germany for the 2012-13 season. His infectious smile and lively sense of humor will be greatly missed in this city. Lord is a wonderful ambassador for the game of hockey and we wish him all the best in Europe. Link to his interview earlier this year.

It was announced that Hunter Tremblay signed with the St. John’s IceCaps this morning, much to the dismay of OKC fans. He, and his short-handed goals, will be greatly missed in OKC this coming season. (Source: IceCaps agree to terms with four skaters on AHL Contracts.)

The Edmonton Oilers signed forward Dane Byers to a one-year, two-way contract. Last season Byers played 61 games with the Springfield Falcons and 8 games with their NHL affiliate, the Columbus Blue Jackets. We expect to see Byers in OKC at least part of this coming season.  Read articles related to Byers signing.

OKC fans are very happy to have Yann Danis, the AHL Goaltender of the Year, return to OKC next season. Danis signed a 1-year 2-way contract with the Oilers and we fully expect to see him up in Edmonton as well. Congratulations!