The OKC Barons fell to the Charlotte Checkers last night 3-2 putting a halt to their 6-game winning streak. The Checkers who appeared last night were the same fast playing, aggressive team that we encountered back on October 28th.  They are not content to sit back and let their opposition work their way down the ice to them. They take the game. They control it. And that is exactly what we watched for close to two periods. Fast, aggressive Checkers’ hockey.

At 4:16 into the first period the Checkers Jon Matsumoto scored the first goal of the night, with an assist from Drayson Bowman. Three minutes later at 7:13, Charlotte put their second point on the board when Brett Sutter scored, with assists from Justin Krueger and Jared Staal. In the second, Charlotte scored for the third time at 6:33 into the period, with a goal by Justin Soryal and assists by Bobby Sanguinetti and Brett Sutter.

Late in the second period at 19:28, the OKC Barons  put their first point on the board when Linus Omark scored his first OKC Barons goal of the season, with assists by Ryan O’Marra and Gilbert Brule. The Barons battled hard throughout the third period and scored their second goal of the night with Tyler Pitlick’s rebound off his own shot at 6:02. The Barons outshot the Checkers 12-6 in the third, but their rally fell short.

Yann Danis saved 30 of 33 shots on goal and the Checkers’ goaltender Justin Peters saved 29 of 31 shots on goal. Barons penalties were under control last night, the only one being a roughing penalty by Teemu Hartikainen. The three stars of the game were Brett Sutter, Jared Staal and Tyler Pitlick.

The Barons have been making a habit of comeback wins, but a Charlotte Checkers’ 3-goal lead is very difficult to overcome. The Barons will face the Checkers five more times this season.

Today the OKC Barons face the Milwaukee Admirals in Milwaukee and ex-OKC Barons player and fan favorite Zack Stortini will be playing for the Admirals. 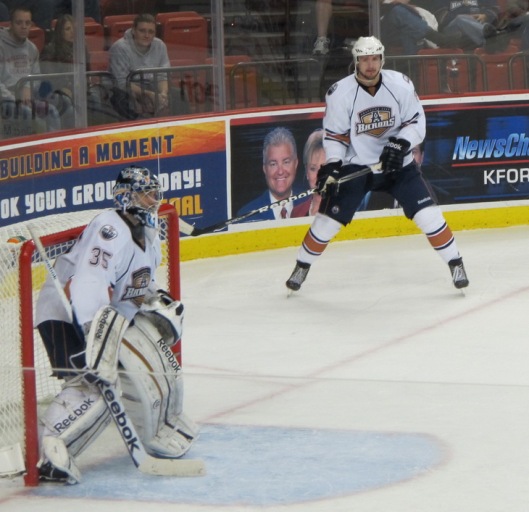