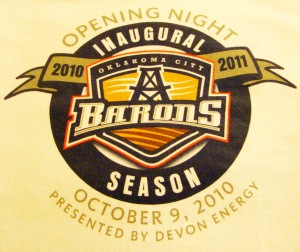 October 9th is the Oklahoma City Barons’ first anniversary. Last year they opened their inaugural season against the Houston Aeros with a crowd of over 9,800 fans in the Cox Arena. Despite the fact that the Barons out-shot the Aeros, 31-26, the Aeros beat the Barons 6-1 in that first game. The only score of the night — the first goal in OKC Barons’ team history — was made by Teemu Hartikainen, with an assist from Brad Moran at 10:53 into the second period.

Opening night also provided fans with their first fight of the season and franchise history when OKC’s defenseman Shawn Belle went up against Aeros Jarod Palmer.

Two players on the 2010-2011 roster are currently on the Edmonton Oilers roster:

Twelve players on the season opening 2010-2011 roster are no longer with the OKC Barons:

The Barons will play the following teams this season:

I look forward to the Barons’ games vs. the Chicago Wolves, who are now the AHL affiliate to the Vancouver Canucks. Many Manitoba Moose players who were signed with the Canucks have moved to the Wolves team. The other interesting match up this season will be the Charlotte Checkers who have moved into the Western Division as part of the new AHL division realignment which will more closely mirror the NHL division organization. The Manitoba Moose have moved east and have been renamed the St. John’s Icecaps (now affiliated with the Winnipeg Jets), and the Charlotte Checkers have been moved to the Western Division. Enjoy the OKC Barons’ 2011-2012 Season!