There is that moment – that single moment of frozen time when you realize you have stepped into a nightmare. Early yesterday morning news began to spread that the plane carrying the KHL Lokomotiv team and coaching staff had gone down upon takeoff. What had previously been an already extraordinarily painful summer in the hockey world, suddenly, in one fraction of a moment, went beyond words. Shock and grief and heartbreak – from fans and colleagues, but most of all from their parents, wives and children. Sadly, I know first-hand exactly what those families experienced yesterday. Pure shock numbs your senses. And a part of you refuses to believe the horror. How could something so unimaginable ever happen?

Much of yesterday was spent mourning the loss of the Lokomotiv team, trying to make sense of the disaster, and honor the dead. With the recent loss of Derek Boogaard, Rick Rypien and Wade Belak still so much on our minds, the loss of the KHL team broached epic proportions. As I thought back upon this cruel year, I found myself taking a tally. Some were well-known names, others were known only to their teammates, friends and families, but no less important.  Some names fit within our recent non-stop discussions of enforcers, depression, concussions and the ethics of fighting, and there will be plenty of time to better confront those issues. The nationalities on this list cover the entire hockey world: Russia, Belarus, Latvia, the Czech Republic, Slovakia, Sweden, Canada and the United States. Some had played in the NHL and were well-known in the U.S., even beloved, and a few had Stanley Cup wins on their resumes.  But most importantly, they were human beings, with families and friends.

How does one begin to comprehend such news? How do you mourn such a monumental loss?

In January former San Jose Sharks’ forward Tom Cavanagh, age 28, died from apparent suicide. Diagnosed with schizophrenia, Cavanagh had been institutionalized several times prior to his death. His father Joseph Cavanagh stated: “Our son, Tom, was a young man who bravely fought the demons of mental illness for many years. This private struggle far surpassed his public athletic accomplishments. Our family will celebrate and always remember his beautiful but short life.” See Tom Cavanagh, Former Sharks Forward, Found Dead at Providence Mall, at Aolnews.com

New York Rangers’ enforcer Derek Boogaard, age 28, died from an accidental overdose of alcohol and painkillers, and it was later disclosed that Boogaard had been battling drug addiction for several years. See Rangers Player Is Found Dead in His Home, in The New York Times.

Ian Jenkins, age 15, a young goaltending prospect, died after a fall from a friend’s pickup truck. Only two weeks earlier Jenkins had been drafted by the London Knights of the Ontario Hockey League. See Hockey star Ian Jenkins’ final gift: life for another young man at AnnArbor.com. 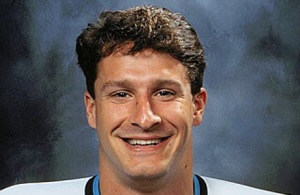 Robert B. (Bob) Haggart died June 6th. “As a member of the Toronto Maple Leafs organization, Bob was one of only a handful of people to ever win a Memorial Cup, an Allan Cup and a Stanley Cup. He was also a member of four Stanley Cup championship winning teams and a President’s Trophy winning team.” Globe and Mail Obituary.

Harley Hotchkiss, died June 22, at age 83 — “the former NHL chairman and Calgary Flames co-owner, […] tirelessly fought for the survival of Canadian teams, and maintained dialogue with the players’ union during the dark days of a lockout that wiped out the 2004-2005 season. Hotchkiss was a key architect of the new NHL economics that made it possible for the league to return to Winnipeg and ensured the survival of all six (now seven) Canadian teams.” See Globe and Mail article.

Barry Wilkins, age 64, died of lung cancer. On October 9, 1970, Wilkins scored the first goal in the Vancouver Canucks debut game. The Globe and Mail (July 1, 2011) noted: “Last year, Wilkins returned to Vancouver for events marking the club’s 40th anniversary. Joined at centre-ice by former captain Orland Kurtenbach, Wilkins, wearing a No. 4 sweater, dropped the puck for a ceremonial opening face-off. The disk was the one with which he had scored the Canucks’ first goal.” See In 1970, he scored the Canuck’s first NHL goal — They Lost the Game, but He Made History, in The Globe and Mail.

Rick Rypien, former Vancouver Canuck and current Winnipeg Jets player, dead at age 27. After battling depression for years, Rick Rypien ended his life on August 15th. See my earlier article on Rypien which links to many tributes on Rypien and his career.

The Kontinental Hockey League (KHL) club Lokomotiv players and coaches died in a plane crash as they departed for their first game of the new season. Their entire main roster, four coaches, plus four junior players were on board. Two survived the crash, one crew member and Lokomotiv player Alexander Galimov, age 26, who died Sept. 12 from his injuries. The team’s Finnish goal coach, Jorma Valtonen had remained behind.

Acknowledgements: Thanks to Joe Pelletier for his assistance providing additions to my list.

Recap of some of yesterday’s stories at Preds on the Glass.

J.T.’s article Dark Summer from The H Does NOT Stand For Habs.